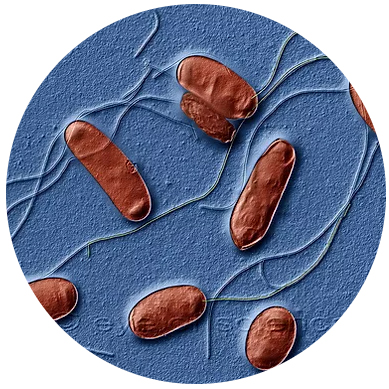 Legionella spp. (legionella including all species) exists in all water sources. However, it was never a part of human diseases until we started to build pipe systems for domestic use of water. Legionella transmits through aerosols, tiny water droplets that are not common to natural water sources. In the shower at home, the Jacuzzi only used for special occasions, or the jet washer when getting ready for summer, are all items that will produce aerosols. This means that monitoring and controlling water pipes should be enough to remove Legionella spp. as a human pathogen.

​Legionella grows best with the introduction of amoebas that try to eat the bacteria, but become hosts for growing bacteria instead. In conditions without amoebas there will still be growth with favourable conditions in water holding temperatures between 25-50°C. With higher temperatures killing the legionella, which survives only a few minutes when the temperatures rise to 65°C and over. Major problems arise with the formation of biofilm in the water pipes and gives the legionella perfect conditions for growth. Biofilm is created when living bacteria get the possibility, maybe an area in the pipes has a slightly lower temperature than the rest of the system, to attach to the inside of the pipe and build up by having dead and living bacteria, amoebas, and so on be attracted to these locations.

​Legionella was first identified after an outbreak at a conference for the American Legion in Philadelphia, USA in 1976. After the bacteria identification it was traced back to other outbreaks, the earliest one in 1947. The species that caused the 1976 outbreak was Legionella pneumophila, which is still the most common cause of Legionnaire’s Disease in most of the world.